One of my earliest TV obsessions that I deemed worthy of countless re-watches (mostly due to incredibly limited channels in my house — my parents upgraded from antenna to satellite dish about ten seconds after I got my driver’s license) was the quintessentially 90s teen comedy Saved by the Bell. In the mornings, I would sit on the edge of my bed in a towel, half-asleep with dripping wet hair, as I predicted punchlines and mouthed them along with the gang at The Max. For years, I thought “preppy” meant blonde and I was terrified that one day I would become so stressed about geometry that I, too, would develop an addiction to caffeine pills. I pined for a high school experience as gnarly and tubular as the one everyone seemed to be having at Bayside High. More than I wanted the dramatic irony of a kooky mixup at a masquerade dance or to save ducks from oil spills, the thing at Bayside that I really wanted was Zack Morris. 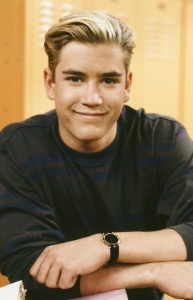 I pulled all three of these pictures from an online dictionary entry for “smarmy”. Zack Morris was incredibly selfish and would do anything or betray any one of his strangely loyal friends to get what he wanted, but OH BOY, is he cute or what?

A couple of years ago, we introduced this cultural phenomenon as charter bus entertainment for the helpless 55 teenagers on the WPC youth ski trip. They pretended to hate it. They begged us to turn it off. They even stole the DVD box set from a chaperone’s bag while we were stopped at Chick Fil A so that they wouldn’t have to watch another second of it. I later serenaded them with an a capella version (including a vocalized guitar solo) of the SBTB theme song over the bus mic. Kids these days groan and yell when they love stuff– isn’t that fun?

As I watched hours of SBTB on the bus that weekend, suggesting pivotal episodes for the queue (which only further confused the kids– “WHY DO THEY ALL RANDOMLY HAVE JOBS AT THE BEACH NOW?” “WHO IS THAT GIRL ON THE MOTORCYCLE?” These are incredibly valid questions.), my lingering affection for the fun nature of the show itself and all the teenage antics to which I once aspired was not as strong as I expected. Maybe, on the other side of high school, I’m sad that I didn’t get the full Bayside experience and that life has passed me by. Maybe I just have a slightly more sophisticated sense of humor than I did from ages 9-17. Maybe I never actually paid attention to the show at all, but was so enamored of Zack Morris that I fell victim to his charm, his wit, and his super cool cellular phone.

That’s not the only time that my affections for Mark-Paul Gosselaar have taken the wheel from my sense of reason. I took the LSAT a second time after becoming enthralled with his role as a NYC public defender on TNT’s Raising the Bar. To be fair, that was the dream long before I ever saw the show, but this definitely pulled it off the back burner. Zack Morris as a PD? Cut to hours and hours in the architectural wonder that is the Seattle Public Library, practicing logic games and listening to Vampire Weekend and envisioning myself working alongside MPG to provide legal counsel to all the accused. My return to the law school plan didn’t stray too far from the first attempt and a career in public defense remains a missing chapter in my story, despite my motivational daydreams.

So, this morning, when I was getting ready for work, I got out of the shower, sat on my bed, wrapped in a towel, and turned on Hulu ONLY TO FIND that there is a new NBC sitcom starring none other than the bodacious MPG.

And it’s not great. I watched the pilot of Truth Be Told and things do not look good. Pilots are tough and I never bail after a single episode (except with Lost, but that’s because it scared me). MPG plays the white guy in a pair of couple-friends and, while the writing seeks to brave difficult ideas about race, I think Mashable’s Hillary Busis really nails it with her review entitled Mark-Paul Gosselaar’s ‘Truth Be Told’ is the edgiest comedy of 1985. I appreciate NBC’s stab at diversity, but the gratuitous emphasis on the struggle of being the white guy in a group of non-white-guys (asking what words he can and can’t say, for instance) doesn’t excite or challenge me. Neither does worrying that if a white man has both a wife and a babysitter who are both of blended Asian ethnicity, that people will think he has “a thing”. I can hear conversations around me that echo this fear of talking about race and understanding one another and maybe seeing adult Zack Morris exemplify a lot of those fears in one thirty-minute block is just disappointing because this is where we are. This is what network TV writers think will resonate with America’s Friday night primetime viewers: laughable insecurity with otherness and a clumsy attempt to express tolerance. I thought we were a little further along than this, and maybe next week’s episode will turn back toward a fun comedy about friends who happen to make up a racially diverse group, rather than a caricature of how hard it is to be white and not subsequently racist.

But yeah, I’m going to keep watching. Unless… is Franklin and Bash on Netflix?

Amid the overwhelmingly negative response to the finale of How I Met Your Mother, I feel compelled to offer some thoughts of redemption. Spoilers, dead ahead. (ha.)

My personal reaction to the finale was shock, born of denial. Sure, the dead mom clues had been dropped and I was prepared for that, however cold-hearted I felt to truthfully admit that this move didn’t bother me too much. We didn’t know this character, really. We didn’t even know her name until the last 10 minutes of the series… so, while it does make me sad for Ted that the love of his life does not outlive him, I can’t say I feel gypped by that twist. The shock, though, while I should have seen it coming a mile away, was the Robin piece. After a few hard pinches, I came to terms with the twist and started on the road to acceptance for this, the fate of my favorite gang in the booth at MacLaren’s.

Because we spent the entire final season in a 72-hour span, then rushed through decades of birth, marriage, divorce, estrangement, death, and all the very important unmentioned pieces that happen in between those things, in a span of about 43 network TV minutes — it’s all confusing. While it’s tempting to put ourselves on that couch, as if we’re sitting there with Penny and Luke hearing the end of this story for the very first time, that is not the case. If given the opportunity to craft the timing of the final season with the show’s writers, I might have suggested a less rushed finale; but, sadly, TV execs and creators have yet to consult me pre-production. While it might seem like the kids just threw some dirt on their mom’s casket and shoved Ted out the door to go hit on Aunt Robin, we should remember that there were years in between and God knows these kids have the full story (more than they wanted to know) of how Ted feels at this point, after all this pain and heartache –and not just from the passing of his kids’ mother.

No, the show wasn’t about the mother, but anyone who thought it would magically become that in the last season was asking to be disappointed. Yes, it was cheap that the mother of Barney’s child doesn’t even get a name. No, we STILL never found out where that pineapple came from…

And sure, this wasn’t a perfect ending. We followed a hopeless romantic through nine years of hopeful first dates, attempts at long distance relationships, not waiting the three days to call, spending every halloween in the same outdated “hanging chad” costume so the slutty pumpkin from years before would recognize him, holding out for the love of his life that he knew was out there somewhere. Everyone was rooting for Ted Mosby to find the girl with the yellow umbrella, marry her, have those two poor kids, eventually morph into Bob Saget, and live happily ever after. And a bunch of those things happened. (The unresolved Bob Saget frustration is up there with the pineapple.)

Ted wanted the one. He was a big believer in her. He found her. They weren’t ready for each other. Then he found another one. They were ready and they went for it. Life happened and he lost her. At the risk of completely oversimplifying a very complicated notion, how appropriate that Ted Mosby in all his emotional endurance, would be dealt a hand that continuously turned his expectation on its head. Maybe there’s not a “one”.  Ted has a “two” (unless Robin kicks the bucket and the kids start nudging him to hop on a plane to Germany to get Victoria back) — and who better to experience love in a manner beyond what he could conceive to be true than Ted. It doesn’t cheapen his marriage or understanding of love; in fact, I think it widens it. That Ted is given two great loves in his life is a gift. This piece of the twist gives me more hope than despair — that we, the Ted Mosbys (and Marshall Eriksons, Lily Aldrins, Barney Stinsons, and Robin Scherbatskys) of the world cannot plan for or anticipate the wonder and mystery of what life brings.

Why couldn’t Ted and the mother just have met, had the kids, and lived a long and happy life together? Well, they could have and they did – but not long enough to get to the “front porch” of old age.  I appreciate Bays and Thomas for this dose of reality, even if a nine-year series finale may not have been the best place to introduce realism to this storyline (and hammer it home). Sometimes things don’t work out in the perfect way we want and may feel like we deserve, especially after enduring so much other heartache and confusion on the journey. The road goes on, the scene continues to be painted, the sun rises and sets — and we keep going, hopefully with care and support of good friends who love us enough to slap us in the face when we need it (figuratively, with honesty and respect. come on, guys…) hard enough to leave a handprint. And that is what this show was about — the folks who stand around you in the whirlwind that is figuring out who you are, where you’re going, and how the hell you’re going to get there. We might get lost, we might get sidetracked, we might decide to go to the mall…. today. We might find love and we might lose it.