When it comes to “last chances”, I’m likely to either jump at the opportunity to preserve some piece of nostalgia or ignore it altogether. Why bother now and get all attached when it won’t be available to enjoy much longer? Is it worth doing the thing one last time –in this way, with these people, in this place– before things change and this specific thing is no longer an option for me? Or is it better to move on without unnecessarily memorializing a thing that would otherwise just drift on by?

Mark is in Denver on his bachelor party this weekend and I am taking advantage by soaking up every bit of self-indulgent introvert time that I can. This weekend, after two separate bachelorette celebrations of my own, feels like a different “last hurrah” of sorts– a sendoff to my solitude. Of course, this is not my final chance to spend a night or two in my house alone, nor were my bachelorette celebrations the last opportunities to have fun with my friends (nor is Mark’s trip the last chance to spend time with his). I will spend many more evenings (alone and with the people I love) in my house drinking wine, eating popcorn, and dancing around to Robyn songs blasting so loudly that they fill up my tiny living room. There will be plenty of days like this one, where I strategically work my to-do list to feel accomplished enough to go a little rogue and spend a morning sitting alone in a days-from-closing restaurant so I can eat a sandwich before it’s too late. The traditional bachelor/(ette) party espouses this sense of “last hurrah” and, while I know full and well that my days of doing the things that I want to do are nowhere near numbered, it is always fun and lovely to give myself an excuse to indulge. Sometimes I just need an expiration date.

About a month ago, I was leaving breakfast with some friends and caught a glimpse of that week’s Nashville Scene, the cover of which bore a meaty, marinade-soaked, utterly delicious looking Italian sandwich. I leaned down and said, “Oh, hello. I need this.” Picking up the magazine and looking more closely, I realized it was an article about the Sandwich Bracket, a fun competitive piece that they were running in conjunction with March Madness. I believe I was, at that point, one week deep into my path toward a randomly-selected bracket victory in not one but two bracket challenge competitions (both of which I just happened to organize). Naturally, I felt that this copy had been placed in my line of vision for a divine reason.

I learned that the sandwich in the cover photo is from Savarino’s Cucina. From their menu, I am guessing that this sandwich is known as the Ed Pontiere– mortadella, soprassata, cappicolla, provolone, lettuce, tomato, and homemade hot sauce. It’s safe to say that getting to Savarino’s to eat this sandwich jumped immediately to the top of my list. I’d actually been meaning to get there for a while since my friend Christy told me a story about a day when marathon road closures kept her from driving where she needed to go. She passed the time by stopping in and discovering one of the most amazing sandwiches she had ever eaten. Even later, I learned that this place– which for years has been on my “must be a drug front” list of apparently under-patronized establishments with expensive real estate (see also: my treatise on the entire neighborhood of Berry Hill.) has a charming little speakeasy upstairs. It was for these and many other reasons that I was devastated to find just a week after snagging the Sandwich Bracket cover issue of the Scene, that Savarino’s was set to close its doors at the end of this April.

I drove over this morning, arriving at 11:08 or so, not to appear too eager. A man showed me to my choice of tables and gave me a menu. Without looking at it, I asked him what the best sandwich was and I ordered one. The Stevie B arrived at my table about 15 minutes later, fragrant, warm, and breathtaking– just what I imagined. The bread was perfectly toasted–the layers swirled delightfully and arranged so that every jaw-unhinging bite gave me a taste of each bold ingredient– the eggplant asiago, broccoli rabe, chopped romaine and tomatoes. Don’t forget the remarkably present, yet nonabrasive, hot sauce– la bomba caibresse. La bomba, indeed. 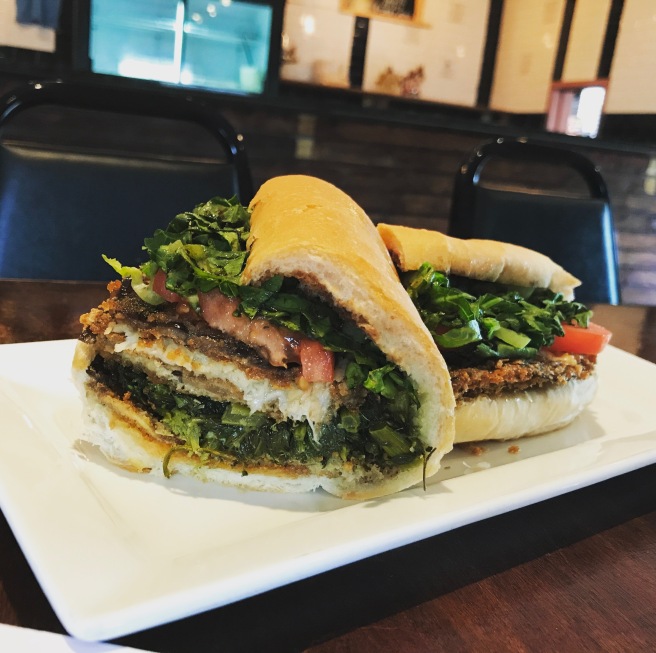 This place felt special– I sat there long enough to overhear the man who seated me (who I believe is the owner) talk to every other customer as if they were old friends. I hear him asking a man when the baby is due and sending his well-wishes to the new mother, realizing she probably won’t be in again. I see him pull up a chair at a table of regulars from the Belcourt Theater and hear him telling them of his plans. He’s going on vacation in Italy for a whole month this summer. I was clearly wrong about the drug front hypothesis. (Well, actually – I’m always reluctant to write that off. But this restaurant’s patronage is certainly authentic.) It is obvious why this treasure has been a stronghold on Belcourt Avenue for as long as I can remember. Neighborhood restaurants like this are what make Nashville great. Maybe they’ll re-open somewhere else with less demanding hours and you’ll get another chance to try the Stevie B. But you might not if you don’t hurry.

Unlike the possibility of two people ever having fun again after their wedding, the opportunities to enjoy some things actually are finite. My life wouldn’t have been wrecked if I hadn’t decided to wander into Hillsboro Village for this sandwich today, but I sure am glad I did. Knowing my time was limited gave me a nudge to spend my day in a way I might not otherwise have spent it, eating leftover cheese and (that’s right) more popcorn. And it might not have been my last chance because I might go back again next week before they close their doors. Gather thee Stevie B’s while ye may. Gather thee whatever ye need to gather.

Savarino’s Cucina closes for good on April 29. Nashville folks, do yourselves a favor and don’t miss your last chance to enjoy a sandwich that rivals its atmosphere for richness, character, comfort, and general delight.